When I was messing around trying to get the 4G modem working on my Thinkpad X250 for this post I ended up doing a little debugging by connecting to the modem over serial using cu:

It turns out that the Sierra EM7345 modem in my Thinkpad can be controlled through AT commands sent over serial. Over at zukota.com there's a guy who's done a seriously good job of experimenting with this modem and documenting what was previously not very well documented.

For example if we wanted to use a SIM locked with the PIN "1234", then send the message "Hello, world!" to the Czech number 775123456, we would connect as above and enter the following:

Getting the GPS position involved issuing the XLCSLSR at command and parsing it's output. This is a little more complicated, since there's a slight delay in the response, and the response contains dozens of fields (I've included the request/response in its entirety below so you can see):

I was delighted when I found this out, as I had recently discovered the pyserial library, and realised I could interact with the modem and explore/expose some of the modem's functionality via a Python library.

I rolled up my sleeves and wrote a library called em73xx (PyPI, GitHub) which will issue the necessary AT commands to send and receive SMS messages, and retrieve the current location using the modem's GPS functionality.

To install the library either retrieve from pypi using pip:

... or you can clone the smcl/em73xx repo and install using setup.py:

Once it's installed you can use em73xx by importing the Modem class and instantiating it with the path to the serial device on your system (probably /dev/ttyACM0, as below) and optionally specify the PIN for the sim inserted:

To retrieve all the SMS messages on the SIM, and print them to stdout we can use the getSMS method:

If we want to send a message we can use the sendSMS method:

And finally if we want to retrieve the current GPS position, we can use the getGPS method - note that the modem can fail to get a GPS fix, and will return None if so:

Ultimately I started this because I wanted to have a simple utility that integrated with xmobar which would inform me whether I had received a new SMS, and would allow me to reply to existing messages or compose an entirely new one. To achieve this I wrote xsms which is a utility that will either print to stdout the number of unread messages (for xmobar) or launch a GUI, depending on the command line switches used. 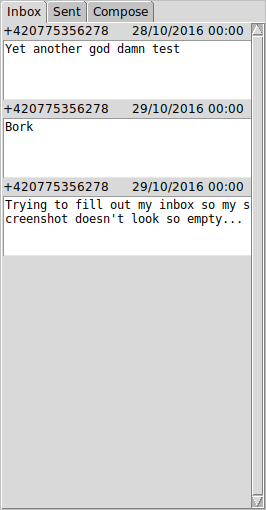 Again you can either retrieve xsms from pypi using pip:

... or clone the smcl/xsms repo from github and install using setup.py:

Once xsms is installed you can either launch it standalone.

And if you want to have a little indicator in your xmobar you can use something like the below (which takes advantage of the ability to specify the font via tags to easily get some icons from Font Awesome):

So when you add %sms% to your xmobarrc's template and restart you'll see something like this:

... and if you want to be able to click the icon to raise the GUI, you can surround it with an <action> which invokes xsms:

This is an idea that sat half-finished in my ~/dev folder for about 6 months, and I'm really glad that I was able to take it from a single hacky one-shot script to two fully-fledged packages released on PyPI and ready to be used. There is still some additional functionality I'd like to add to em73xx, for example I only grab longitude/latitude from the GPS data and I'd like to be able to reset or power-cycle the modem in case of problems, however it's in pretty good shape overall.

As for xsms, it's the second Tkinter application I've put together, and while I'm finding it easier each time I write something (with fewer cut-paste lines from effbot.org's Tkinter docs) it's starting to be a little unwieldy. For example the ttk module allows you to add widgets to your application with a unified theme, but it's missing a multi-line text entry widget - which is something I use for inputting and displaying the SMS messages. This meant that I had to either decide to put off styling xsms or add some hacks to customise the Tkinter.Text widget that I ultimately used. In addition programatically constructing the UI using the grid() and pack() layout managers feels a little like creating a webpage laid out using nested <table> elements in the late 90's. Ultimately if I find myself writing a Python desktop app in future I'll spend a little more time investigating the frameworks available and weighing them up against using Tkinter, now that I'm broadly familiar with it.