After working through Philip Guo's excellent series of lectures on the CPython VM I found myself looking at the performance of string concatenation. Strings are immutable in python - so they cannot be modified in-place, you have to create a new string. This also affects string concatenation, so if we want to tack one string onto the end of another we might have some code like this:

When the CPython interpreter is running the above code, it's doing something conceptually similar to the following:

Note even though Python is unlike C in that it doesn't rely on a trailing NULL to terminate strings (we store each string's length), it does by convention still null-terminate them - which is where the extra "+ 1" byte comes from.

Anyway, if we have to repeatedly join strings together we have to be careful how we do it, just in case we accidentally introduce some slow, inefficient code. This has been long understood in the python community, for instance here is an article from 2004 which explored different methods of concatenating strings, and compared their performance.

I was curious if there was any difference on how things shaped up on modern hardware (the test used an old 400 MHz Celeron) and a newer version of Python (this used python 2.2.1, the latest version of python 2 is 2.7.12) - so I grabbed the source code and started playing around.

It needed a tiny bit of tweaking however - the timing module it uses doesn't seem exist in the standard library and current version in pypi isn't compatible. I modified it to use the time module, the source code is here on GitHub if you're interested: stest-new.py.

As a quick recap, there are 6 methods of concatenating strings which we're putting under the microscope:

The original tests were performed using Python 2.2.1, for comparison's sake I've re-run them on my computer just to see: 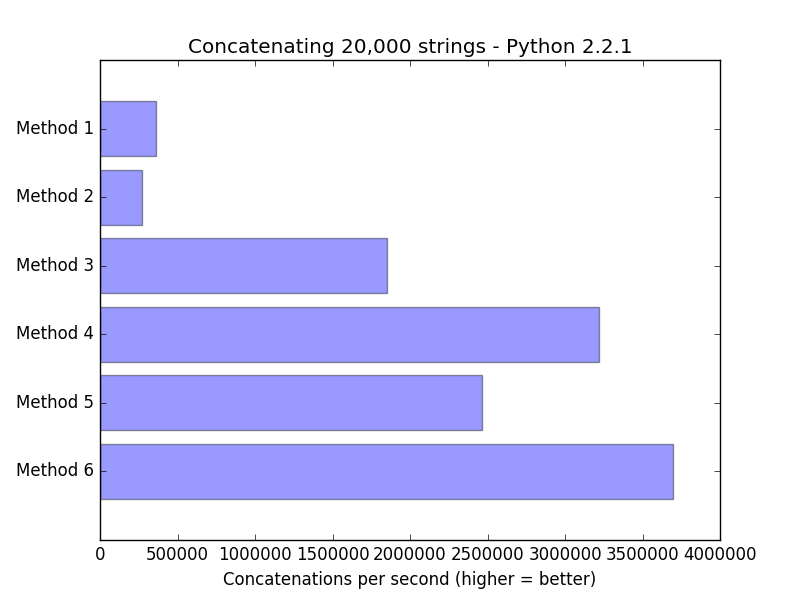 So in Python 2.2.1 the list comprehension method was the fastest by a pretty clear margin. However when I re-ran using 2.7.12 things turned out very differently: 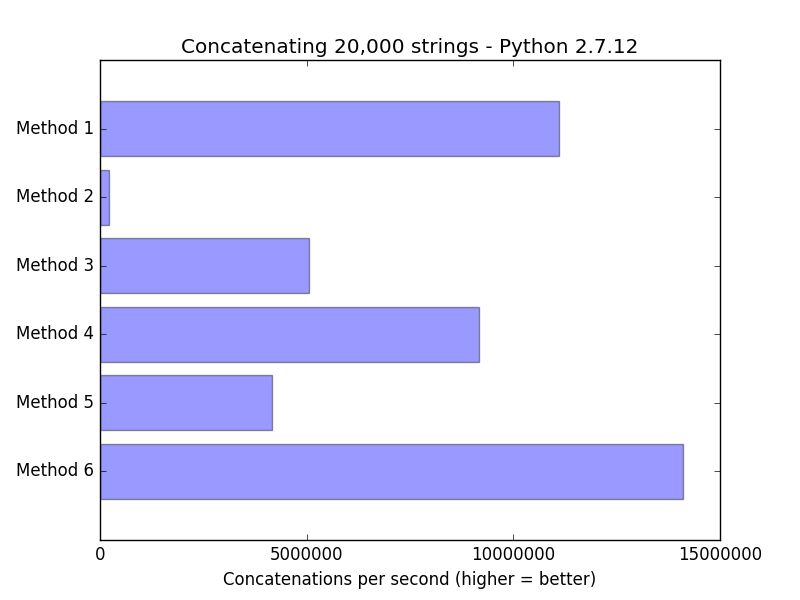 In the time since 2.2.1 the performance of the naïve string concatenation method has improved hugely, it's now it's the fastest method (note: this is using a Python interpreter I built, using the Python 2,7.12 package that comes with Debian it's actually the fastest). This is surprising, since I thought it was relatively well-established and understood that it was slow, or just not ... pythonic. I was curious exactly why Method 6 was now slower than Method 1, so I disassembled the functions using the dis module.

There were a number of SET_LINENO instructions in the 2.2.1 version which I've not shown - it makes the disassembly a little easier to read and the performance impact would have been negligible - when tracing is turned off (which it is) all this instruction did was set the current frame's f_lineno and continue executing the next instruction.

So pretty much identical, which I half-expected - even though we're looking at two versions of Python which were released 14 years apart the compiler doesn't seem to get a great deal of changes, so the generated bytecode shouldn't change much for simple code.

There are slightly more differences when comparing how 2.2.1 and 2.7.12 generate the bytecode for the list comprehension method. However, aside from a couple of quirks in the 2.2.1 version (i'm not sure why we call DUP_TOP on the list we created, and I have no idea what _[1] is) much of the bytecode is broadly the same - we produce a list of integers by applying CALL_FUNCTION to xrange with argument loop_count, and then iterate over the results, calling UNARY_CONVERT on each and assembling either a list or string using INPLACE_ADD or LIST_APPEND.

Since the generated bytecode contains no substantial differences, if we want to understand why the naive concatenation method (which uses INPLACE_ADD) became super-fast over the last 14 years we'll need to inspect how the Python VM interprets this code.

To save some space and time I'll skip straight to the meat and bones of where the actual string concatenation occurs - which is in Objects/stringobject.c, in the string_concat() function. It's quite small, so I've incuded it below - but I've stripped some macros for easier reading:

This is pretty much exactly the algorithm I described in my first paragraph - after a couple of checks to ensure we're definitely  dealing with strings we malloc a new buffer and memcpy both strings into it.

Again I'll skip straight to where the concatenation occurs - which is in Python/ceval.c in the string_concatenate() function:

This one is a little more complex because there are a couple of neat optimisations.

Firstly, if the next instruction to be executed is one of a handful (STORE_FAST, STORE_DEREF, STORE_NAME) we save ourselves a few cycles by doing a little setup ahead of time.

However more importantly, if there's only a single reference to the destination string we attempt to resize it in-place using PyString_Resize() instead of allocating an entirely new buffer. We can check this is the case by forcing this condition to be false:

If we build a Python 2.7.12 compiler without this resize optimisation, and retest: 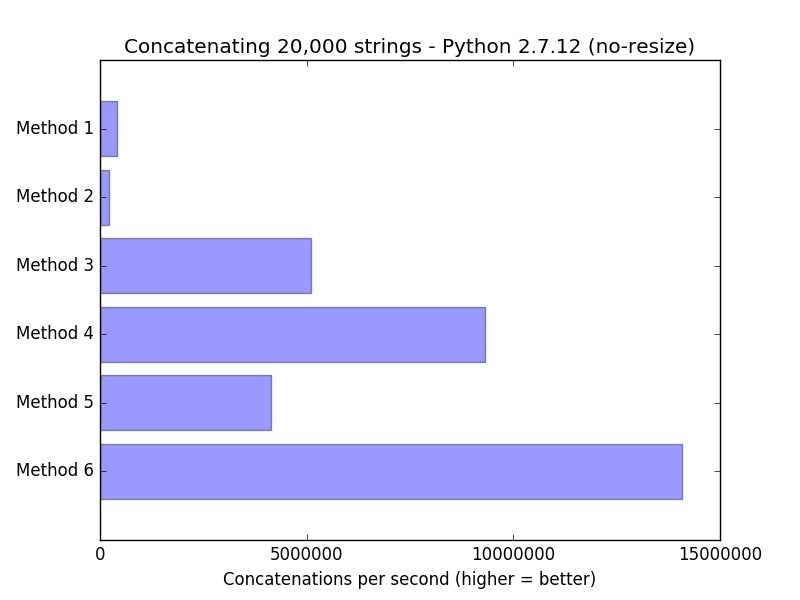 We're right back where we started, with Method 1 being the second-slowest and the list comprehension used in Method 6 outperforming everyone else.

In the intervening years since the original benchmark was performed, an optimisation has been introduced to improve how the CPython VM handles string concatenation. In the context of this specific benchmark it means that if you need to concatenate strings you can go with a naive, slightly more intuitive implementation and performance very close to the recommended, more-pythonic implementation.

It's very likely that this is not applicable in all cases, I'm sure that if we have a number of objects allocated on the heap then it'll get slower very quickly (we won't be able to extend that buffer every time, and will need to find new locations) - however it's still an interesting and surprising result nonetheless.