In part one I just hooked up a little monkey keychain called Chuggzilla to my Arduino. A day or so prior to my 90 Kč spending spree on Chuggzilla I'd just received a 128x64 Adafruit OLED display and realised this was a nice opportunity to play a bit with it. 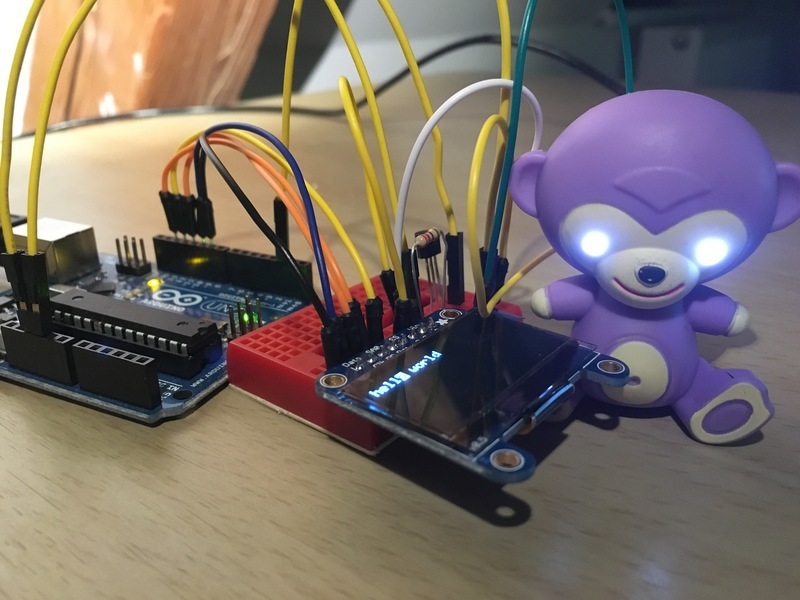 The idea was that Chuggzilla would still scream his weird morse code madness, but the screen would display the actual text behind the message, with the current letter highlighted. I was just wanting to quickly get something working, so instead of integrating with the OLED library using C I just ported my morse code stuff to the Arduino IDE so I could easily re-use the existing API. The final result is pretty fun - though I suspect the current drain from the screen is too high because the previously manic ape noises were almost whisper quiet.

I am not sure exactly who would want to reproduce this, but if you're interested hook the OLED screen up as per the Adafruit wiring instructions then connect up whatever animal or thing you want to control per my original schematic (connecting digital 2 instead of digital13 to the transistor's base, since we need that for the screen), create a sketch with the code below and add the Adafruit libraries.

Code is on this gist on github.